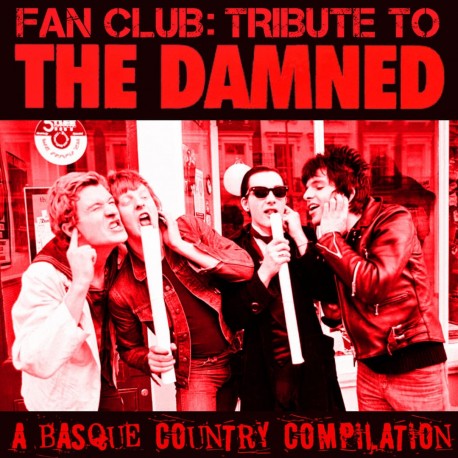 Fifteen renowned present-day bands from the Basque Country pay homage to THE DAMNED, in project promoted by Pookah Sound studio (Bilbao), where all tracks were recorded.

Everybody knows THE DAMNED is a seminal British punk band from 1977. On October 1976, the band released what is considered the first punk single, also released the first punk album and was the first British punk band to tour the US. In discrepancy with the mediatic chaos of the Pistols and the militant commitment of the Clash, from the start, The Damned was more concerned in making the kids bounce nonstop at the gigs. In addition, and despite being dedicated punk rockers, they have always been somehow embedded in the tradition of rock ’n’ roll. Since the beginning, they acknowledged their devotion to the Detroit rock of the late '60s and early '70s, sought the services of a member of Pink Floyd as a producer, and proclaimed their fervour for the Nuggets' garage punk sounds.

It is no wonder that THE DAMNED's influence crosses the barriers of time and musical styles. Traditional and evolved punk rockers, garage fans, post-punkers, HC fans, psychedelics, metalheads... find a place of shelter and stimulus in the music of Londoners.

As outcome of that vital impulse, the LP FAN CLUB, TRIBUTE TO THE DAMMED, A BASQUE COUNTRY COMPILATION is releasedin glorious vinyl in this post-pandemic 2022. Fifteen Basque bands threw themselves headlong into the project without thinking twice. Each of them in a specific frenzy outburst, displaying total systemic enthusiasm, but all with a driving conviction. The majority of the songs chosen by the bands/fans to be revisited are from the classic period that goes from "New Rose” (1976) to the album "Phantasmagoria" (1985), although we can also find three celebrations from the decade of the 90s and the first decade of the new millennium.