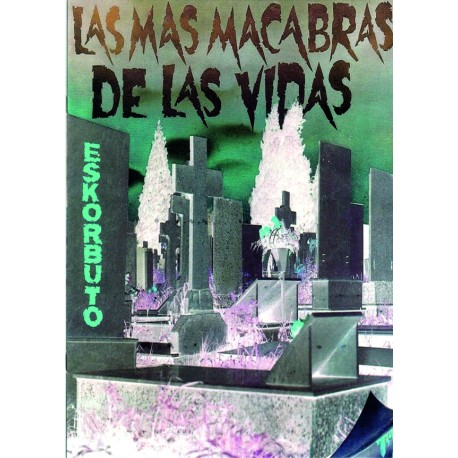 Text and Artwork by Roberto Ortega

Remastered at The Rockstudios by Carlos Creator

Vinyl reissue - as rock’n’roll liturgy deserves - of the fifth album of an independent and combative band like no other. The last of the independents as the band stubbornly testified throughout its intense career. On July 1988 the most obscure record of ESKORBUTO’s discography was released.

Vomited from the entrails with the boredom of a life blackened by the soot pouring from the nozzles of the factories of the beaten left bank of the Nervion river. Time had already hardened them and their attitude was plain, above all they were “anti-everything” . “Las Más Macabras de las Vidas” (the Most Macabre Of Lives) is a timeless record and paradoxically sounds fresh again in this genuine and until now missed vinyl.

It is a great opportunity to taste again the subtle shades of exasperation that hang around the grooves of the bitterest record of the band. ESKORBUTO inoculates in the listener harder than ever the rage and the nihilist-agent of which they were transmitters.