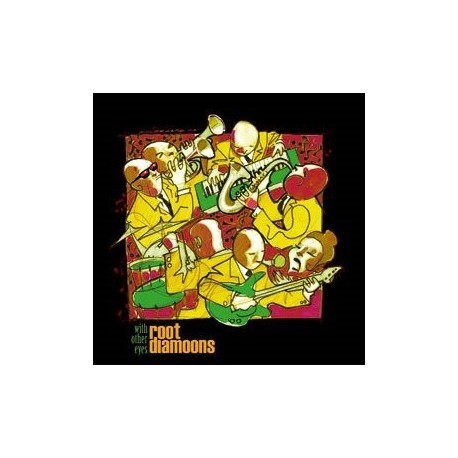 ROOT DIAMOONS - With Other Eyes - CD

ROOT DIAMOONS - With Other Eyes (CD)

Those lads that in 2001 with more enthusiasm than skill with their instruments started doing music in the Horta-Guinardo district of Barcelona under the name of The Short Skankers are today ROOT DIAMOONS. A consolidated experienced and awarded project that collects the legacy of traditional ska, rocksteady and genuine ska-jazz from the Jamaican geniuses of the 60’s -meaning Jackie Opel, The Skatalites or Justin Hinds & The Dominoes- with the same fondness with which they listen to the American revivalists of the 90’s such as Hepcat, The Articles, Jump With Joey and The Slackers.

Elegance is owned or not . It is not enough to show off in a just bought Armani suit or to emulate the pioneers in a futile attempt. Style written in capital letters cannot be pretended, it is acquired and assimilated after long years of obsessive listening to the classics and embodying crystal clear ideas on stage. Hundreds of hours spent in a noble cause with giants like John Coltrane, Charlie Mingus, Charlie Parker, the Soul Vendors and Lyn Taitt & The Jets. With record labels like Blue Note, Atlantic, Studio One and Treasure Isle.

Definitively a sure bet from the Brixton Records-Silver Bullets factory: 14 tracks with dance floor vocation that help us to face life with an upbeat attitude. As if raiders in search of the very essence of Jamaican roots and bringing it to the jazz side or as teenagers in love with an uptown girl whose name might be Laila or Mary Ann