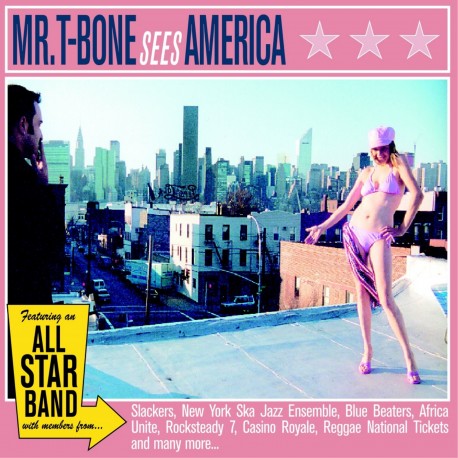 Always in love with Ska and Reggae music, he started collaborating with the maximum exponents of this scene in italy. Naturally Gigi was quickly enrolled as a full member of “Africa Unite”, the most famous Italian reggae band, and "Giuliano Palma & The Bluebeaters" a fantastic Rocksteady Group. Touring and recording with both, he experienced 3 years of brilliant success. During this period he also took part in recording sessions for Vallanzaska, Civic Jazz Big Band, Casino Royale, Scisma, Platinette, Vinicio Capossela, Persiana Jones and Wah Companion.

But it is 1999 the crucial year for Gigi "Mr T-Bone" de Gaspari. At that time he met other out of the ordinary musicians, all coming from the Jazz and Ska scenes, and decided to create “The Jamaican Liberation Orchestra”, the first Italian ska-jazz band. So in the time off in between tours with “Africa Unite” and “GP & the Bluebeaters” The Jamaican Liberation Orchestra played gigs around Italy. In the beginning of 2000, he composed and interpreted the soundtrack for the movie “Ravanello Pallido” which was a great success in Italy. And in 2002 came “That’s It!” the first album featuring Gigi as band leader, a work displaying a very special blend of ska and jazz. He composed, arranged, played and then selected 8 fantastic songs, plus two tributes: one to Maestro Astor Piazzolla (Libertango) and one to his great love, Jazz Music
(The lonesome road). Mr T-Bone and his J.L.O. toured collecting big success and enthusiastic people.

In the summer of 2002 Mr. T-Bone joined The New York Ska-Jazz Ensemble as a band member for their European tour and once the tour was over he joined the band on the trip back to New York to participate in NYSJE’s album “Minor Moods”. After that he kept on touring with them.

After that hectic period Mr.T-Bone is in great shape and it seemed the right time to gather in a "super jam session" the best musicians of the Italian and New York ska scenes. MR. T-BONE SEES AMERICA was recorded "live" "inna jamaican style" in Brooklyn at the Coyote Studio including fourteen new songs, written, played, sang and arranged by Mr.T-Bone. He was the "chief musician" of an ALL STARS BAND featuring musicians from The Skatalites, The Bluebeaters, The Slackers, New York Ska Jazz Ensemble, Africa Unite, David Hillyard & Rocksteady 7, Reggae National Tickets, Casino Royale, Easy Dub All Stars... and produced by Vic Ruggiero (Slackers, Rancid). Recorded in 2004 it was released in January 2005 with quite a success proved by the fact that many songs from this album were also selected for compilations in Japan, USA, Germany and Italy as well as for TV commercials. The jazz flavoured ska gets you into the golden times of jamaican jazz of the 60's and the brilliant sound makes you wanna dance. Mr. T-Bone at his best!