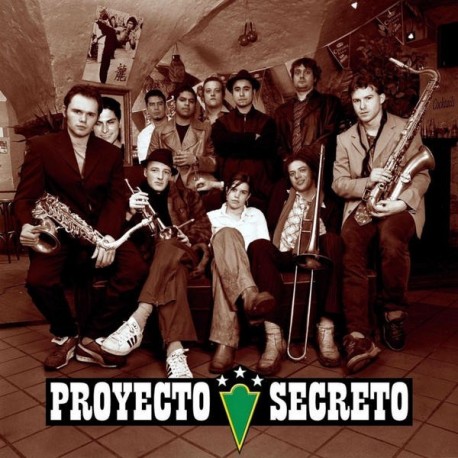 Since the first songs released with Brixton Records, our Chile-Belgium band PROYECTO SECRETO has grown to be a great Ska Jazz, Latin Ska and Rocksteady band. “Bruce Lee is Back” is a proof of that, a real gift for your feet and mind.

The roots of PROYECTO SECRETO go back to 1995 when Roberto and Michael started a band called 'The Subzero Skaband'. Unfortunately the band split somewhere in 1997 but the energy remained. In 1998 Eduardo comes to Belgium to visit his good old friend Roberto (both are from Valparaiso, Chile) and he came to stay, because in December 1998 'PROYECTO SECRETO was founded.

In two years of hard work in the club circuit P.S. grew to be one of the hottest bands in Belgium. In year 2000 they do their first international tour visiting also Bilbao, Madrid, Seville, Valencia, Tarragona…. And in 2001 they visit The Basque Country again as supporting band for maestro Rico Rodriguez also appearing in festivals along with Trojans, Skunk, Akatz…That same year they publish two songs in the compilation “Brixton Cats and the Rudies” (Brixton Records).

At the end of 2001 and beginning of 2002 the band is taking break from the road but behind the scene things are going on and on December 2002 they start recording a full album. On April 2003 the CD ‘Bruce Lee is Back’ is released by Brixton Records. 2003 was a very special year for PROYECTO SECRETO. They play on the main stage in the festival of their hometown Gent and they share stage with the incredible “Tokyo Ska Paradise Orchestra”. They visit the Basque Country again and participate in festivals along with Bad Manners and Alton Ellis and they record two more songs for the new Brixton Records compilation “Brixton Cats and the Reggae Boys”. The year ends with the great festival “ Ska Antwerpen” sharing stage with Alton Ellis, Rude Rich and the Highnotes, the Toasters, Moon Invaders... That same week they also play a gig with Jamaican music maestros the Skatalites. In 2004 PROYECTO SECRETO continues to have brilliant reception by audience and critics and participating in important Belgian festivals like Pole Pole Beach, Fonnefeesten, Viva Lola Festival... Assuming the tradition they put end to the year with a great gig, this time along with David Hillyard & the Rocksteady 7. This concert is still ringing in the ears of all ska fanatics of Gent and surroundings.