> BRIXTON RECORDS>DAVID HILLYARD & THE ROCKSTEADY 7 - Get Back Up! - CD 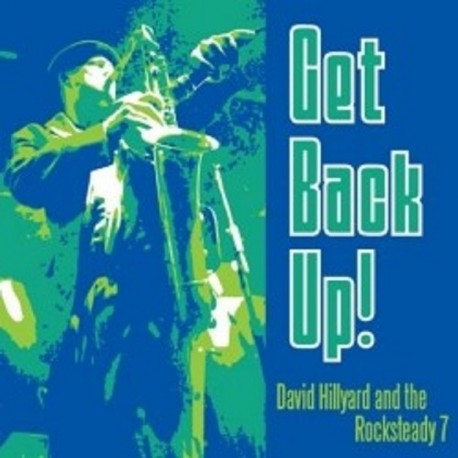 Tenor and soprano saxophonist, David Hillyard is one of the innovators of the American ska scene. His group, the Rocksteady 7, mixes instrumental Jamaican “roots” rhythms ala the Skatalites, Burning Spear, and extended jazz improvisation ala David Murray, Charlie Haden, and Pharaoh Saunders.

His new cd GET BACK UP! is a blinding tour de force of his Jamaican Jazz conception. The title track evokes the power ofColtrane's Love Supreme and is a screaming triumph over adversity. Through the baldhead reggae of "Death Ride", to the Brazillian Bingi, "Ça Purange", and aconfident ska version of the 60s classic, "Sunny", Dave and his friends are at the top of their game¨.

David Hillyard has been a professional musician for over 20 years. As a 17 year old youth he played with The Donkey Show, one of California’s pioneering ska bands. He also played with Hepcat which went onto become one of the biggest ska acts of the 1990's. He has also performed with ska groups like the Stubborn All-Stars, Skinner box, reggae artists like Cornell Campbell, Congo ‘Ashanti’ Roy and Johnny Osbourne, jazz artists like Roy Campbell, blues artists like Simon Chardiet, soul singers like Archie Bell (“Do the Tighten Up"); punkrockers like Rancid; and even with Fermín Muguruza.

But Dave is best known for his work with The Slackers. He continues to be a key member of that organization and has appeared on their 10 cd releases and 1,000s of live gigs. With the Slackers, he currently averages about 120-150 gigs a year in the USA, Canada, Japan, Latin America, and Europe.

Through his diverse experience, Dave has developed an unique style. A mix of the warm island tonalities of Roland Alphonso and Tommy McCook, the strident cries of John Coltrane, the smears of Sidney Bechet, the otherworldliness of Pharaoh Saunders, the honking blues of King Curtis, and the swing of Ben Webster, Lester Young, and Coleman Hawkins. As Jazziz magazine put it succinctly, “HILLYARD CAN PLAY ”.

His band, Rocksteady 7, is a shifting collective of musicians featuring some of the best players in New York City. They have experience playing with everyone from Sting to the Skatalites. Senior among them is veteran percussionist,Larry McDonald. Larry began his career back at the inception of ska music with Carlos Malcolm’s Afro Jamaicans. He went on to perform on several classic reggae tracks such as Cherry Oh Baby, Funky Kingston, and Rivers of Babylon. Then he left Jamaica and played long stints with Taj Mahal and Gil Scott-Heron.

The Rocksteady 7's debut cd, PLAYTIME (Hellcat/Epitaph), was widely praised for its innovative mix of Jamaican “roots” rhythms with Jazz and Latin influences.

Their 3rd cd, WAY OUT EAST(Brixton), captured the powerful energy of the band live. Recorded in Jena, Germany this disc was noted by Worldmusic.com as a perfect Jazz/Reggae fusion and will leave fans of both in a "state of bliss."