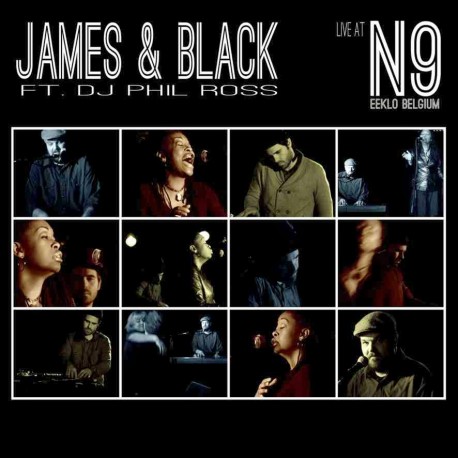 JAMES & BLACK creates a hybrid of Southern Soul and classic hip-hop, merging flavors of Texas and New Orleans with a heavy dose of Jay Dee/RZA/Tribe Called Quest. The result has been dubbed “Guerrilla Soul” referring to the “anyplace/anytime” attitude they have towards music. James & Black is on a mission, plain and simple. Live at N9 is the first official sonic offering from the Guerrilla Soul trio and the first reference of Brixton Records Soul Series.

Recorded in Eeklo, Belgium in December of 2012 at the famous N9, the recording captures the contagious chemistry of the trio that has been gaining popularity across Europe. The dynamic rhythm section of DJ Phil Ross and Bruce James (keyboards) create a soulfully edgy foundation for vocalists Bella Black and James to tell their stories. Their sound is fresh and familiar at the same time. The set features original compositions as well as rearrangements of Tom Petty's "American Girl", Sarah Vaughan's "Whatever Lola Wants", and Curtis Mayfield's "The Makings of You".

From Houston, Texas, Bruce James is a soul man no doubt about it. Listen to him and his music and you'll hear it: the sounds of the South, the church, the juke-joint, and the flow of music that comes from Memphis to Detroit. It's in his voice, in his inimitable touch on the keyboards, and in the songs he writes as well as those from the R&B, jazz, and pop canon that he makes all his own.

Bella Black is an American born singer-songwriter known for her powerful deep contra-alto vocals and her eclectic mix of musical genres including R&B, soul, jazz, and rock. Bella Black is more than a poet and a singer; she is a force of nature exuding the gift that God has given her, enthralling everyone that sees her perform. Her undeniable smile and passion for music creates an instant connection with her audience.

Phil Ross joined James & Black in 2012. He was inspired by the underground American DJ's and hip-hop of the 1990's and began to grow out of the underground scene and to explore all types of music. By doing so, he started to envision the turntable as a jazz instrument. Phil relocated to Austin in 1996 forming his first band 'Erbamate’ and collaborating with several local artists.