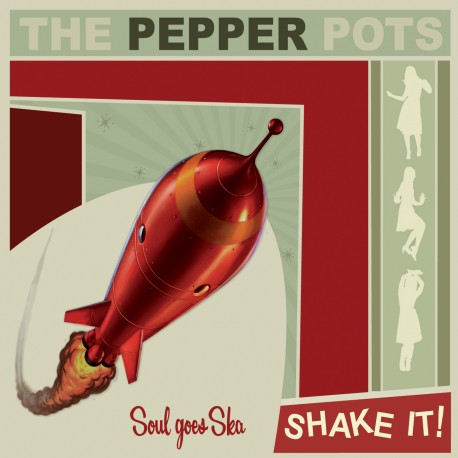 It´s that easy, shake it and take in calmly this cocktail of black music. A return to the glorious era of the clubs where all kinds of people got together to dance and enjoy a drink while they listened and danced to the best music of the time. A place with a lot of class, where the people showed off their best suits and set themselves free on the dancefloor. Taking their cue from the 60s, The Pepper Pots bring back the sound of the bands that made the dancefloors vibrate and became popular thanks to labels such as Trojan, Studio One or the American Motown, among others.

The Pepper Pots were formed in 2002. After 2 years on the scene they release their first LP, "Swingin´ Sixties", on the Basque label Brixton Records; a disk distributed all over Europe. It wasn't until 2006 that the band made a giant leap in their career, appearing on various compilations, giving some forty concerts during the year and sharing the stage with names as outstanding as Laurel Aitken, Derrick Morgan, Dave Barker, Winston Francis, The Aggrolites, Mr. T-Bone, Dr. Ring Ding, Macka B, The Toasters, New York Ska Jazz Ensemble, Ki-Mani Marley... and ending up touring on their own, taking part in various festivals in major European cities such as Brussels, Berlin, Neuchatel, Prague...

The Pepper Pots began 2007 with their second album SHAKE IT! where they pulled together all the experience gained and a feeling still alive for black music of previous decades. This disk, released and distributed by Brixton Records around Europe and by Ska in The World in Japan, features top class special guest appearances: the star appearance of the Jamaicans The Pioneers (Jackie Robinson and George Dekker) , the French A.S.P.O. and the German Dr. Ring Ding . A disk recorded in analogue and with instruments of the time, following the line of the first, but this time featuring the collaboration of an orchestra made up of more than 20 musicians that take part on various tracks on the disk.

In short.... a disk for dancing, listening to and going back to the era when ska, rocksteady, early reggae or soul were the pop music of the moment.